Global warming could see number of days too hot to work outside nearly DOUBLE to 39, by 2050 – posing a dire threat to agriculture industry

Climate change will make life even harder for agriculture workers in the coming decades, with nearly double the number of days when it will be too hot to safely work outdoors.

According to a new study from Stanford and the University of Washington, the number of days where the daily heat index becomes too high for safe outdoor work will rise from the current average of 21 a year to 39 by 2050.

By 2100, the team estimates there will be 62 days each growing season when the daily temperature index becomes too hazardous for prolonged outdoor exertion.

A new study found that climate change will nearly double the number of days it’s too hot to safely work outside during each growing season in the US, rising from 21 to 39 by 2050, and  reaching 62 in 2100

‘I was surprised by the scale of the change — seeing a doubling of unsafe days by mid-century, then a tripling by 2100,’ Stanford researcher and lead author Michelle Tigchelaar told UW News.

‘And we think that’s a low estimate.’

The daily heat index is an expression of how hot it feels when humidity is factored into the standard air temperature, similar to the windchill factor.

To reach their conclusions, the team combined recent daily heat index data from every crop-growing county in the US and calculated how current climate change models will affect those regions in the coming decades.

While past studies of climate change and the farming industry have focused on crop yields, the team felt it was important to consider how rising temperatures will affect workers, who often spend 12 and 14 hour shifts working in harsh conditions.

‘The people who are the most vulnerable are asked to take the highest risk so that we, as consumers, can eat a healthy, nutritious diet,’ Tigchelaar said. 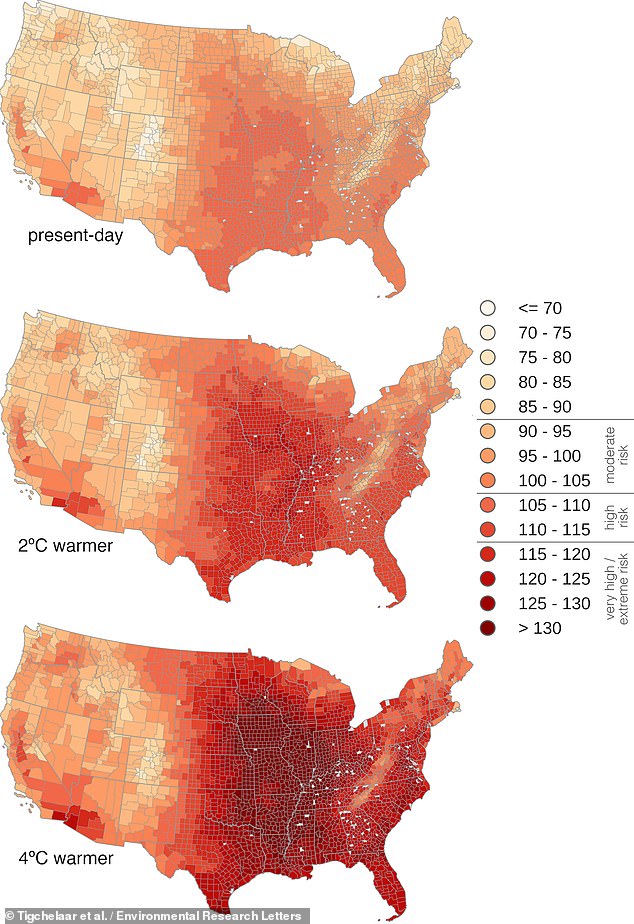 The team combined current daily heat index data from every crop-growing county in the US with climate change estimates for the coming decades. Past studies of agriculture and climate change focused on crop health but the team wanted to look at the effect on workers

According to the US Bureau of Labor Statistics, there are officially 1 million people who work as pickers for the US agriculture industry, but industry analysts estimate the actual figure is likely more than 2 million when factoring those working off the books.

Ag workers are especially vulnerable as most lack health insurance and many come from outside the US and lack legal standing to work in the US, making them reluctant to seek medical attention or raise safety concerns with employers.

The team was inspired to begin the study after learning of the 2017 death of a blueberry picker in Washington state, Honesto Silva Ibarra, who died from dehydration after a long and grueling work shift.

The researchers identified four main mitigation measures that could be used to deal with extreme heat.

Farm operators would need to implement at least three of these four changes to offset the temperature increases.

WHAT IS THE PARIS AGREEMENT?

The Paris Agreement, which was first signed in 2015, is an international agreement to control and limit climate change.

It hopes to hold the increase in the global average temperature to below 2°C (3.6ºF) ‘and to pursue efforts to limit the temperature increase to 1.5°C (2.7°F)’.

It seems the more ambitious goal of restricting global warming to 1.5°C (2.7°F) may be more important than ever, according to previous research which claims 25 per cent of the world could see a significant increase in drier conditions.

In June 2017, President Trump announced his intention for the US, the second largest producer of greenhouse gases in the world, to withdraw from the agreement.

The Paris Agreement on Climate Change has four main goals with regards to reducing emissions:

2) To aim to limit the increase to 1.5°C, since this would significantly reduce risks and the impacts of climate change

3) Goverments agreed on the need for global emissions to peak as soon as possible, recognising that this will take longer for developing countries